Earthquakes have been recorded throughout human history, oft-times explained in their immensity as the actions of gods such as Poseidon, or ‘a great battle between a thunderbird and a whale’. However, Science in its early forms investigated earthquakes as well.

The theories that have been put forward up to the present date are three, and their authors three men, Anaxagoras of Clazomenae, and before him Anaximenes of Miletus, and later Democritus of Abdera.

Anaxagoras says that the ether, which naturally moves upwards, is caught in hollows below the earth and so shakes it, for though the earth is really all of it equally porous, its surface is clogged up by rain….

Democritus says that the earth is full of water and that when a quantity of rain-water is added to this an earthquake is the result. The hollows in the earth being unable to admit the excess of water it forces its way in and so causes an earthquake. Or again, the earth as it dries draws the water from the fuller to the emptier parts, and the inrush of the water as it changes its place causes the earthquake.

Anaximenes says that the earth breaks up when it grows wet or dry, and earthquakes are due to the fall of these masses as they break away. Hence earthquakes take place in times of drought and again of heavy rain, since, as we have explained, the earth grows dry in time of drought and breaks up, whereas the rain makes it sodden and destroys its cohesion.

Aristotle refuted the flaws he found in their theories, and ‘…that not water nor earth is the cause of earthquakes but wind-that is, the inrush of the external evaporation into the earth,’ due to the dynamic nature of air.

Pliny in his Natural History, stated:

The Babylonians were of Opinion, that Earthquakes and Chasms, and all other Occurrences of this Nature, are occasioned by the Influence of the Planets : bat of those three only to which they attribute Lightnings. And it is effected by the Means of their keeping their Course with the Sun, or meeting with him: and especially when this Concurrence is about the Quadratures of the Heaven.

In other words, earthquakes are caused by the electrical influences of specific planets in specific configurations.

In 426 BC, the Greek historian Thucydides inquired in his book History of the Peloponnesian War about the causes of tsunami, and was the first to argue that ocean earthquakes must be the cause.

The cause, in my opinion, of this phenomenon must be sought in the earthquake. At the point where its shock has been the most violent the sea is driven back, and suddenly recoiling with redoubled force, causes the inundation. Without an earthquake I do not see how such an accident could happen.

Some centuries after the Greek philosophers, the Spark Chang Hêng of the Han Chinese Imperial court also theorised that earthquakes were caused by air:

The chief cause of earthquake is air, an element naturally swift and shifting from place to place. As long as it is not stirred, but lurks in a vacant space, it reposes innocently, giving no trouble to objects around it. But any cause coming upon it from without rouses it, or compresses it, and drives it into a narrow space … and when opportunity of escape is cut off, then ‘With deep murmur of the Mountain it roars around the barriers’, which after long battering it dislodges and tosses on high, growing more fierce the stronger the obstacle with which it has contended.

However, he did something about it and created the first practical ‘earthquake weathervane’ or seismometer:

His clever and sensitive device used a pendulum to trigger a ball-drop through one of the eight tubes decorated as dragons to indicate the direction in which the government should send aid. The Occident would take some centuries to catch up to this level of detection, unfortunately.

When Science started to overtake other methods for explaining the world, these antique theories, and the records of observers, explorers and sailors became vital to developing new and more rigorous theories of the origins of earthquakes, and means to measure and predict them. The massive Lisbon earthquake of 1755 gave impetus to a Scientific approach to earthquakes, although the actual Science of Seismology did not develop as a named discipline until well into the 1800s.

Let us establish some definitions for those who may not have dabbled in the Geological Sciences:

Portugal’s disaster provoked some of the first seismically-protected construction in Europe. Models were tested by having troops march around them to simulate ground shaking. The Prime Minister the Marquis de Pombal sent out an analytical survey that looks surprisingly like what one might find on the aether-net currently:

In 1760, prompted in part by the Lisbon earthquake, the English Reverend John Michell published ‘Conjectures concerning the Cause and Observations upon the Phænomena of Earthquakes’ in the Royal Society’s journal, Philosophical Transactions, in which the first thoughts about faults, the Earth’s crust, and earthquake propagation by waves were put forth.

The Americas were not bereft of their own major events. The New Madrid earthquakes in December 1811 to February 1812, due to being ‘intraplate’ activity — in other words, the fault involved does not exist at a continental edge, but instead in the middle of generally very solid bedrock — rang churchbells in Boston, nearly 2000 kilometres away.

Robert Mallet is the next notable name in the Scientific study of earthquakes, and has been called the ‘father of seismology’. He published “On the Dynamics of Earthquakes” in The Transactions of the Royal Irish Academy, Vol. XXI, in 1846:

The present Paper constitutes, so far as I am aware, the first attempt to bring the phenomena of the earthquake within the range of exact science, by reducing to system the enormous mass of disconnected and often discordant and ill-observed facts which the multiplied narratives of earthquakes present, and educing from these, by an appeal to the established laws of the higher mechanics, a theory of earthquake motion.

With his son serving as assistant, he spent several years after publication using blasting powder to determine the speed of seismic propagation in sand and solid rock. He also studied a significant Neopolitan earthquake after the fact, using scientific observational techniques instead of untrained eyewitnesses; and published a further paper on volcanoes and their source of heat.

At the same time as Mallet was setting off explosions of gunpowder in England, Alexis Perrey, in France, was making quantitative analyses of catalogs of earthquakes. He published a paper on earthquakes in Algeria two years after Mallet’s paper, in 1848, in the journal Mémoires de l’Académie des Sciences, Arts et Belles-Lettres de Dijon. He particularly studied the position and phases of the moon at the time of seismic events.

In Italy, also starting in 1848, physicist Luigi Palmieri started studying Vesuvius in close detail. He invented an electromagnetic seismograph, one of which was installed near Mount Vesuvius and another at the University of Naples. These seismographs were the first seismic instruments capable of routinely detecting earthquakes imperceptible to human beings. With Swiss scientist François-Alphonse Forel, he co-created Rossi–Forel scale for determining the intensity of earthquakes. 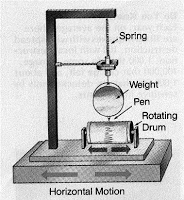 A few decades later, Ōmori Fusakichi would pioneer seismology in Japan, doing extensive work with British scientific consultant John Milne, who had been hired by the Japanese government. Ōmori is best known in the field for his observation describing the aftershock rate of earthquakes, now known as Omori’s law.

The field expanded from there from these first astute tools, and provides dramatic discoveries over a century into future from these beginnings. There is no detail too small in the study of earthquakes. John W. Judd said in his book:

In this way I have been led to dwell at some length upon subjects which might not at first sight appear to be germane to the question under discussion — such as the characters of lavas revealed to us by microscopic examination ; the nature and movements of the liquids enclosed in the crystals of igneous rocks; the relations of minerals occurring in some volcanic products to those found in meteorites; the nature and origin of the remarkable iron-masses found at Ovifak in Greenland; and the indications which have been discovered of analogies between the composition and dynamics of our earth and those of other members of the family of worlds to which it belongs.
Volcanoes: what they are and what they teach by John W. Judd, published 1881